Last February, from the stage of the Code Media conference in Huntington Beach in California, Campbell Brown, head of Facebook news partnerships, launched a cannon of warning to publishers who think they will get a favorable agreement with Mark Zuckerberg’s company. :

“My job is to make sure there is quality news on Facebook and that publishers who want to be on Facebook have a business model that works,” said Brown. “If anyone thinks this isn’t the right platform for them, they shouldn’t be on Facebook.”

The sinister warning comes after Zuckerberg himself informed the world of the zeroing of the organic virality of the posts published by the Fan Pages, and after experiments in 6 countries (Sri Lanka, Bolivia, Slovakia, Serbia, Guatemala, Cambodia) of displacement of fan page posts in a new “Explore” section dedicated to news.

Brown’s friendly message is a sign of growing tension between the web giants and publishers, who are trying to grasp widespread concerns about big tech companies to get a bigger share of the digital advertising market, where Facebook and Google now control 73% of US advertising revenue.

As the parties sharpen their weapons in an endless war of position, a Democratic congressman from Rhode Island, David Cicilline has presented a bill that exempts publishers from applying antitrust rules so that they can collectively negotiate the terms for the distribution of their content on the social network.

Cicilline says the bill was designed to level the obvious disparity between publishers and technology giants, certainly not to impose the result of possible business partnerships on the market. Without a derogation, in fact, the collective action of publishers could circumvent antitrust laws on a price cartel or refusal to deal with their competitors.

The main supporter of the bill is the News Media Alliance, the commercial association formerly known as the Newspaper Association of America, which represents over 2,000 newspapers in the United States and Canada.

The group has been pressing for this exemption for at least a year. “Facebook and Google are now our main regulators,” says David Chavern, president and CEO of the group.

The digital duopoly in fact determines the way in which content is distributed, what is assigned with priority, what is shown in searches, and in news feeds, all without any input from publishers, nor clarity on the functioning of the algorithms.

Publishers, as is known, bear all the cost of news production, and the digital duopoly collects most of the profits through the sale of advertisements and the extraction of value from billions of Big Data, in addition by not paying taxes such as other publishing companies.

Chavern says the News Media Alliance is looking to bring about changes in five areas:

Platforms should share data on publishers’ readers;
Highlight editorial brands better than other posts
Support subscriptions for publishers
Potentially share more advertising revenue
Consider paying for some content.
As everyone knows, over the past 15 years, the giants of Silicon Valley have swallowed a number of industries on their way like black holes, reaching the top of the stock market in terms of stock market capitalization.

Chavern himself added that the news business deserves intervention because of its role in healthy democracy.

“Our country will not suffer terribly if we have bad quality cat videos, or unwatchable films and programs. The United States will suffer if we have bad journalism, “he said, indicating Pew’s data showing that newspaper advertising decreased by $ 4 billion from 2014 to 2016, even though web traffic for the best US newspapers grew 42 % during the same time period.

Obviously, Facebook and Google have not responded to Chavern’s questions.

Chavern also says that politicians in Washington don’t always understand that reporting and distributing news comes at a cost. He said he recently spoke to a staff member of a well-known congressional politician who suggested that coverage of weather events such as hurricanes should be free

“Why?” Asked Chavern, stressing the cost of sending reporters.

I believe we can all agree with Chavern in stating that there cannot be a world in which a future of free journalism can be built.

However, Cicilline’s bill is the latest of many seeking to curb tech companies on antitrust grounds. Nobody 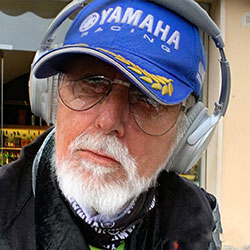 This error message is only visible to WordPress admins

Duomo di Soave Playing The Organ After The Battle

Behind the Scene of GG Soave

Behind The Scene of GG Chiosco Pineta Ostia